More and more I’m becoming an eco-aware person because I’m finding paper straws are showing up more frequently in restaurants. Paper straws are a much more eco-friendlier version of the plastic straw which shouldn’t exist, but do. The mouthfeel of them is so awful and the taste of the beverage so far ruined that it makes me mad respect when the sweet lady at the sushi place behind where I live gets on everyone to reuse their straws. We need to cut carbon emissions fast and it’s growing more obvious each day.

If we don’t, paper straws are just the start of the dystopian future where the US starts issuing Star Citizen packages as bonds and Bitcoin is the official in-game currency of World of Warcraft. We don’t need to jux our reality any further from the median into some Demolition Man world with the shells. They’re not the solution that a sane world turns to. So let’s join hands and help out, even in video gaming.

According to Big Fish Games, if we remove physical media from the equation we can reduce carbon emissions by as much as three entire countries of Italy. That’s a pretty awesome start. Even if it means the final nail in the coffin of GameStop. These upcoming media-less consoles are a really good example of where we need to be going.

We need bigger hard drives and bandwidth needs to be more accessible so that can stop being a defense of physical media. We can watch a near infinite amount of nostalgia about all the old media boxes and all that. PC gaming is all but completely removed itself from the physical media realm. You buy a game box you’re gonna get a piece of paper with the key and a download link.

We can cut down on energy too. Idle games should have really strong offline rewards to encourage actual offline play. I’m guilty of leaving my phone or computer running in order to let an idle game farm away.

If a game doesn’t need a server, why have one? It’s just going to be taken down some point in the future and you’ll either not patch the game and it’ll break or you’ll release a patch but the game will feel empty and soulless.

Gamers can also start to loosen their stringent demands on things like physical media. Okay I totally agree. Buying a game and then ebaying it when you’re done for like over half of what you paid is a sweet deal. I get it. I don’t disagree. There can be a good solution the problem and we should start really asking what does that look like.

I’m sure there are people far smarter than me with some amazing ideas that would really push the envelope forward. I’m not the person with the absolute solution, per se, but I am a gamer who really, really, really doesn’t want to face a future where paper straws are the answer to a question no one asked. So let’s reduce those emissions, together. 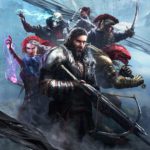