Astral Chain is harder to categorize than most games because while it is part RPG, part action game it is also part detective game, part collection game and part visual novel. These tips below will help you through the game itself, if you’re looking to pull off an S+ ranking then see our tips for earning an S+ ranking every time.

You Can’t Collect Everything in the First Playthrough

You can replay levels and this is important, because for file 02 for instance, you can’t get the kitty cat without a different legion. You’ll only have your sword legion and its special ability will be locked until a tutorial. It can be slightly frustrating sometimes because you want to collect everything but the game won’t let you.

The major collectables are the red corruption and one bathroom and one kitty kat per level, in addition to all of the files. You can’t reach all locations the first go around, especially in the early levels.

If you play on unchained, it basically becomes more of a visual novel / detective game. You can switch from casual to unchained at the PC and difficulties can be selected before starting a file.

You can grind material by replaying earlier files if you absolutely need to, but you need to upgrade your X-Baton and your legions as much as possible, especially before heading out into the field. The upgrades give you a lot and the game forces you to at the start of file 03 to learn how during Lappy’s walkthrough.

What you upgrade to isn’t that important to just beat the game and you can grind materials endlessly by replaying earlier files. Just remember to upgrade whenever you get a chance. It takes a lot of cash to upgrade your weapons – so the better you do in a file the more cash you get, so it does help to do some side quests.

You can sell at the vending machine in the break area anything you won’t ever use.

You’ll find a lot of loot, like medicine, located in chests. The interesting thing about the chests is that you get field supplies that are only good in that file, so why not use them, plus they’re free. Since they’re free, it really helps you save your cash for upgrades.

Do The Training Simulations for Everything

A lot of games have training simulations and I just really am not a huge fan of them because it takes forever to choose a training, play through it, then choose another for basic concepts but in this game you really should do as many of them as you can. Even the first set of training teaches you ways to really succeed in combat.

The training is important because there is a lot of things you can do with your Legion that isn’t obvious on the offset, like attacking by having it pull it to you (starting in File 03).

Combat gets easier the more you understand how to use the different combat techniques.

You can play Co-Op with another player, where one player controls the PC and the other the Legion. You can activate this mode in the menu. Does it make the game easier? Well, that’s up to how sync’d you are with your partner.

That’s about it for the major ways to make your life easier in the game. Have fun keeping the Ark safe out there officers! 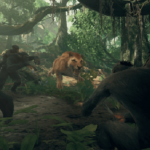 How to Craft the Most Useful Tools in Ancestors: The Humankind Odyssey

Top Tips to Playing Children of Morta – A Beginner’s Guide