What to Play in World of Warcraft Classic

Choosing a class can be difficult and leads often to alts because the grind after level twenty becomes rather severe. First you’re going to have to deal with the fact that most classes just suck at solo grinding. Mages have to sit after one or two enemies and drink. Warlocks take awhile to get enough skills and health and gear to be able to pull non-stop and need the Voidwalker pet to really get going. Rogues are a dime a dozen and Warriors are powerhouses at level 60.

So we’re going to go through the different classes and why you’d play them and the pitfalls of early game and late game. This guide assumes you know the basics of what the classes are and we are going to keep it brief to help you decide, but not make the decision for you. Truly you should play what you have the most fun to play.

Pros: Decent healer, gets group invites. Feral druids are good flag runners. Some find them very easy to level.
Cons: Can be hard to level later on, only a healer in endgame content.

Druids were a weird class. There was a lot of pride in the Druid community back in vanilla days, but they had such a weird place. First they were leather wearers who used INT so gear was really weird and rare for them. To do anything in their other forms, they had to have other gear and it was hard to negotiate for it in a raid. Leveling was hard because none of the forms had a strong definition back in vanilla.

Jack of all trades, true masters of none, they were a rarity in vanilla WoW and likely will be as well in classic WoW. Druid is something you want to play, having a lot of versatility in roles, but ultimately you may find yourself leveling as a healer and playing a healer in endgame content, without as many healing tools as other healers have.

If you want to play a Druid, be ready for it to be nothing like Druids after TBC or WotLK. In WotLK they became absolute powerhouses, strong tanks, viable DPS and great healers. Even in TBC, the forms had far more definition than they did in vanilla WoW.

Pros: Good DPS class, easy to level, good ability to kite. Solo play works well for them.
Cons: Not super easy to get a group as a DPS. Not the highest DPS. Pets had loyalty and were hard to maintain. Have to buy ammo. Alliance only had two races, Night Elf and Dwarfs.

Hunters were pretty patch specific and more for solo play than anything else. Great at farming things and moving about the world and good in solo queue PvP. In raiding, they weren’t super desired as their DPS wasn’t at the very top after Blackwing Lair and in later raids, ammo requirements made it annoying if they ever ran out in the middle of a fight and the pets were glitchy in dungeons and could accidentally pull.

Yet, they’re fun to level and are easy to play. If you want to enjoy the experience and aren’t planning on being top DPS in raids, there is no issue in choosing a Hunter. They also are awesome in PvP, especially open world and solo play in battlegrounds.

Pros: Very good DPS, fun to level, good at kiting and crowd control. Polymorph makes them desirable for dungeons. Makes their own food and water. Decurse is desired in raids. Great crowd control.
Cons: Often has to sit and drink the food/water they make. Glass cannons.

Mages were strong in vanilla throughout. Fun to level and play and great in most situations, there is nothing wrong with playing a Mage. Portals gives them a cool side job as folks will often pay a gold for a portal (which is a lot of money in classic WoW).

Kiting is the big deal in solo play. If you don’t want to kite, they can be a bit tedious and hard to play. They also have trouble soloing elites, which isn’t too odd, but something to note. Heavily desired in both dungeons and raids making grouping easy and the AoE damage is great in the battlegrounds.

Pros: Great healer, strong in PvP due to Plate armor and bubbles.
Cons: End-game really is only a healer.

So Paladins are okay to level, really as retribution or as a healer. The issue is at max level. You can’t tank because you can’t generate enough mana to build enough threat to keep an enemy on you in a raid and plate tank gear is going to the Warrior no matter what you think. As a raid healer, you’ll be desired for your buffs (raids balance Paladins out in groups for healing and buffs) so that’s awesome. Good dungeon healers as well.

Paladins shine in PvP, being strong PvP healers. Really only play a Paladin if you want to heal.

Priests heal. That’s about it. Shadow for leveling is fine, but has some downtime and no free food like Mages. Shadow is also neat for PvP because of mana drain and DoTs, known as face melting back in the day. Really though, healing is what they’re best at and you’ll be doing a lot of it as a Priest.

Rogues are popular because they’re cool and fun. In vanilla WoW there was a billion of them and expect as many in classic WoW throughout the patches. Rogues have so much DPS they have to cool their jets in PvE or they’ll pull aggro easily. Strong in PvP and PvE, they’re very popular.

Leveling is hard as they are glass cannons. If too many enemies attack, you’ll need to run away. One on one though, they’re very strong. Grouping is hard because you have to compete with a ton of other Rogues and most groups want at least a Mage.

Shamans are fun, but aren’t very popular because they’re kind of weak in the same way Druids are. As a hybrid, they end up as end-game healers only. Leveling is fun with totems and you’re welcome in dungeons and raids, but only as a healer especially the later in the game you go.

You can do pretty much everything in PvE but solo elites easily and PvP is fine as a Shaman. They’re just kind of fine though and that is mostly what turns a lot of people off from them.

Warlocks are neat. They’re not as popular as Mages, but have a great time leveling due to the pet, health to mana spell and just in general fun of the class. DoTs are very powerful in PvE and PvP and you’re always welcome to groups for dungeons and raids. There really isn’t anything too wrong with Warlocks and they just get better and better as you move through the raid tiers.

If you want to duo with a friend seriously, Warrior is where it’s at. A healer and a Warrior can pretty much level the fastest of anything. A healer and a Warrior are pretty much can choose what dungeons they want to do and just go do them as finding DPS is a slice of cake. Warriors are tanks in endgame content and as each raid tier comes along, their DPS just gets better and better until Outlands where they’re just extreme powerhouses.

Warriors take a lot of skill to play right, but if you play one right you’re basically a walking god in the game. Guilds can crumble if you choose to leave sometimes. Repair bills are insanely high, but usually guilds will come together and give you everything you want if you’re good.

Non-tanking is going to be hard, not that Warriors don’t do good DPS, but the main and offtank are going to get first dibs on gear every single time. 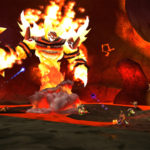 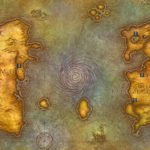