Want to make the most out of ARK: Survival Evolved? Check out our guide down below.
May 5, 2019

ARK: Survival Evolved is a massive game with a massive fan base. Years after release, the hardcore audience appears to still be growing. With that in mind, we have concocted a quick guide for the top ten things new players should know before playing this wonderful game. Check them out below.

1. Hunt Down Dodos and Parasaurs Early

When you first begin the game, you will be unequipped to deal with many of the game’s challenges. Consequently, it is best to start small.

Some of the game’s smaller creatures will not fight back when you attack them. Hunting these creatures can be an easy way to farm resources. For instance, dodos and parasaurs are great targets early in the game.

2. Keep an Eye on the Herbivores

Any creature that is an herbivore can serve as a pseudo radar for predators. If an herbivore is nearby, then it serves to reason that a hungry predator may be nearby as well. More importantly, make note of any herbivores that seem to be in a hurry. If the creature was not startled by you, then it was likely startled by a predator. Consequently, you will want to be on your toes.

3. Craft a Pickaxe as Fast as You Can

When you first start your game, you will be left with nothing but your fists and your wits. One of the first things you are going to want to do is collect some rocks and break down some trees for wood. Then, combine the rocks and wood to make a pickaxe. You can then use that pickaxe to mine large rocks for flint. Use the flint to improve your pickaxe, which will then create a useful tool for extracting many other resources.

4. Turn Your Shelter Into a Fortress

Shelter is important in Ark Survival Evolved, as it provides some respite from the outside world and a place to store your resources. That being said, other players will want to raid your home if you are playing online. Build your shelter accordingly so that you can defend what’s yours.

First, make sure your home has multiple rooms. By doing this, you can ensure that anyone that breaks into your home will have to do some searching if they want to find all of your valuables. Next, build a choke point. Try to build a bottleneck in your home so that you have a spot to make your last stand. You can also implement multiple floors in your home and hide the access to the upper levels.

5. Watch Out for Bodies of Water

Swimming in ARK: Survival Evolved is a dangerous task. Rivers are often filled with Megapiranhas, which can be deadly early on in the game. Beyond that, oceans are filled with Megalodons and other terrifying creatures that can all sense your location from quite a distance away. Consequently, it is best to avoid swimming early on in the game unless you absolutely have to. For instance, jumping into water is an easy way to escape bugs.

6. Know Which Materials Are Important

When it comes to survival in this game, garnering hoards of valuable resources is paramount. Consequently, it is important to know what resources you are going to need early on. The five most important resources are thatch, wood, stone, flint and fiber.

Thatch and wood can each be found in trees. Punching the tree will yield a higher ratio of wood, while using a pickaxe will yield a higher ratio of thatch. Stone is quite common in ARK and can often be found on the ground. Flint, however, will have to be mined out of larger rocks with a pickaxe. Fiber can be harvested from plants. The sickle will hasten this process, but you cannot get this item until level 30.

Other players will be trying to raid your stores for resources. You will have the ability to pin-lock your storage boxes. However, this is not advised.

Any player that wants to steal your things from within a locked storage box will simply destroy the box and take what they want. Since your leftover items are no longer in a storage box, they will disappear after some time. Consequently, it is best to simply leave your boxes open so that looters can take what they want and leave the rest in your storage box.

When playing in multiplayer, joining a tribe is paramount. You will earn experience every time a fellow tribesman does. You can also band together to take down larger foes. In the end, joining a tribe can be massively beneficial for a new player.

9. Don’t Forget to Collect Your Body

During the early stages of ARK, you will likely die quite a few times. This is a brutal game, after all. When you die, all of your equipment will be left on your corpse. Luckily, you can retrieve all of your belongings if you make it back to your deceased body. The trick, however, is that your body will disappear after a short time.

You will only have a short time to retrieve your body after you die. Consequently, you will need to fast track back to your corpse. Place beds throughout the map so that you have plenty of fast travel locations nearby whenever necessary. 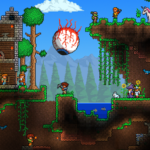 Terraria Tips and Tricks for New Players – A Beginner’s Guide 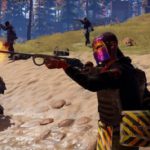