There are plenty of powers to choose from, so here are all their details.
November 13, 2022

Choosing your power in DC Universe Online is a big moment for all avid players. This is the moment you choose your path to victory. There are 15 powers in total for you to choose from, but each power will essentially provide you with the tools you need to perform within one of the three major roles that exist within all MMOs.

Within the realm of DC Universe Online, these roles are defined as tank, controller and healer. Your group will need to consist of at least one of each of these roles if you all wish to succeed.

How To Choose a Tank Power in DC Universe Online

If you want to play a tank in DC Universe Online, you have a few options. The powers that best compliment a tank character are Fire, Ice, Earth, Rage and Atomic. If you choose any of these powers, then you are going to be off to a great start.

If you want to deal some serious damage, while also tanking for your team, it is hard to beat the fire power. Through this power, you can utilize power moves like Immolation and Ignition to punish your opponents.

The ice power allows you to achieve extraordinary levels of sustainability, though you will still be able to dish out significant damage. If cryogenics are more your style, then give the ice power a shot.

This is a rather unique power. You can use the terrain to your advantage by creating some devastating AoE attacks that shake the very earth. Or, you can use this power to summon powerful creatures to your side.

If you want to draw aggro away from your allies and keep all eyes on yourself, then the rage power is going to be the way to go. On top of everything else, you will be able to dish out a punishing amount of single target damage.

This power can be useful rather you wish to dish out AoE or single target damage. Whatever your damage dealing needs, the atomic power has you covered.

How to Choose a Controller Power

The control role is a unique spin on the classic MMO support character. With this class, you will be able to use your abilities to control the battlefield. But, you can also aid your allies with powerful buffs. If this role sounds like it’s for you, then there are five mighty powers for you to choose from.

This power is all about subduing your opponents. If you want to learn how to apply devastating amounts of crowd control, then this power is for you.

The gadgets power allows you to distract your enemies, but also has a somewhat larger emphasis on laying traps to ambush your enemies.

For support players that want to deal damage just as often as they help their allies, there is the light power. With this power, you can frontline with your tanks and punish your enemies with devastating attacks.

The quantum power is ideal for any player that wants to maximize their crowd control abilities, similar to the mental power. This power, however, also provides you with an uncanny amount of mobility as you can teleport away from your foes.

The munitions power will allow you to utilize a massive arsenal of damage dealing explosives and weapons. With a denounced touch to support abilities, this power is great for whenever you want to deal some damage.

How to Choose a Healer Power in DC Universe Online

This is the classic MMO support role. As a healer, your job is to keep your team alive through healing powers and game changing buffs. That being said, there are five different powers to choose from if you want to be a healer.

The nature power will allow you to morph into mighty animals as you use the lands around you to heal both yourself and your allies. With a dash of sustainability, a player with nature powers can both support their team and tank when the situation arises.

This power allows you to summon, buff and attack all at once. Whatever the situation calls for, the sorcery power will ensure that you can benefit your team. Ultimately, this is a rather well rounded healing power.

This power allows you to heal your allies and damage your foes simultaneously. Consequently, this power is great for any player that wants to heal their allies while still dishing out damage on the front lines.

The water power is quite flexible. If you wish to deal damage, this power provides some mighty AoE attacks. However, the power truly shines when you use it to heal your enemies. 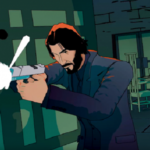 How to Defeat the Harbour Master, Omega and Hex Bosses in John Wick Hex