How to Beat the First 3 Bosses in Bloodstained: Ritual of the Night (Vepar, Zangetsu and Craftwork)

The first three bosses in Bloodstained: Ritual of the Night. Just in time for boss rush!
September 23, 2019

Inspired by the best titles to ever grace the genre, Castlevania series producer Koji Igarashi took the lead on the game’s development. Now players and critics alike are praising it for its retro-wonder. That being said, beating Bloodstained: Ritual of the Night is no easy task.

The game is chock full of intense boss fights, each more devious than the last. With that in mind, here is a quick guide to defeating the first three bosses that will grace your screen.

The first boss you will come across in Bloodstained: Ritual of the Night is Vepar. This boss can be found within the upper right hand corner of the Galleon Minerva area. You will first find yourself in conversation with Gebel. After Gebel decides to leave, Vepar will make her presence known and the fight will begin.

Be sure to save in the save room that is tile below where the entrance is. It’s important to save before this boss because you may need a few runs before you really understand the pattern. Bosses in Bloodstained work like Castlevania bosses in the sense that they repeat specific patterns over and over again. The boss will telegraph their move before they do it.

Vepar will heavily rely on her acid attack by opening her mouth and lobbing purple masses of acid at the player. You will need to time your dodge carefully, as there is a brief window of opportunity to land some good shots on the boss after this attack.

Vepar will also sweep at the player with a large, pink tentacle. Leap over the tentacle to avoid being pulled towards the boss.

Vepar will eventually begin spitting globs of water at you, but this attack phase can be approached similarly to the acid attack phase. Vespar does not tend to string long combinations of attacks together. As long as you manage to dodge her next attack, you will usually have an opportunity to punish the boss with some quick damage.

Hard Mode Advice: In her hard mode, she’s faster and her beam is much harder to dodge. Best to finish the fight quickly by over farming in the previous areas and boosting your shards. This is also some quick early cash in the game when the outpost unlocks – you can sell the extra shards.

You may view a successful battle against the boss within the video provided down below.

The next boss fight you will encounter is against Zangetsu. This boss can be located in the upper right corner of the Entrance area, as accessed through the Garden of Silence area. Zangetsu will attack the player following a brief cutscene.

If you’re having trouble with Zangetsu or any bosses after him: Farm! Farm, farm and farm some more. You’re not obligated to fight him as soon as you reach the boss room. You can just as easily go back and farm enemies, gather gold, upgrade your equipment. The more damage you do, the faster the fight.

This boss is far more agile than the first. If you attack him from the air, Zangetsu will counter with a rising slash attack. Consequently, you should keep things on the ground and take a more patient approach to this fight. Wait for openings and counter the boss’ attacks rather than playing too aggressively.

During the first phase of the fight, Zangetsu will rush towards the player and attack with both vertical and horizontal slashes. The boss can also throw kunai if you spend too much time trying to avoid him.

During the second phase, Zangetsu will set his sword on fire and begin dealing explosive damage during his attacks. During this phase, create more distance between yourself and the boss. Then, attack from afar with your spells. This will take patience and a defensive strategy, but will ultimately pay off.

Hard Mode Advice: Due to the fact you have a lot of time to deal with him, it’s best to farm up to fight him or look into using a glass cannon build (all gun attack, risk ring (on new game+), etc.). Load up on ammo either way as guns are pretty useful to take him out fast.

To see a successful fight against Zangetsu during the first phase, check out the video provided below.

Footage of a successful fight during the second phase of the Zangetsu fight may be viewed down below.

The third boss you will face during your journey is Craftwork. This boss can be found within the Dian Cecht Cathedral. Once you defeat this boss, you will earn the Craftwork Shard.

Craftwork will focus on using grab attacks and slam attacks to pressure you. However, it will also throw environmental objects at you from afar.

Hard Mode Advice: At this point in the game, it’s best to farm to overcome issues. He’s faster and quicker to grab you from what I’ve seen, but you can overcome all of this with more defense and shards. You don’t have the right side of the castle unlocked yet, but there is enough enemies to farm that you shouldn’t have an issue boosting your stats to easily overcome.

After you beat Craftwork, you will want to return to the Garden of Silence and remove the obstacle in front of the chariot driver. You can now visit the right side of the castle. Note that there is two paths coming up, a southern path that takes you to a train station with some higher level enemies. You only need to make it to the very end where the path is blocked, then you can return and continue up the top path.

To see the Craftwork boss fight in action, check out the video below at the 8:46 mark. 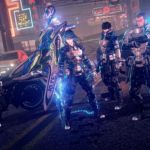