It can be a hard choice between the convenience of downloading the game to your console versus the different advantages to having a physical copy like being able to resell your game. On the PS4 and Xbox One it’s a bit of a different ball game, because you’re dealing with game discs vs. the cartridges that the Switch has, which we will go into below.

As a note, some Switch games now include two important concepts: cloud gaming & physical copies containing download codes for games (vs. all games being on the cart). For cloud gaming, I’m not exactly sure these games are available on cart right now, as of this post I can’t find any (Resident Evil 7 Biohazard, Control, Hitman 3 being available and The Forgotten City). So I’m assuming it’s eShop only. These games use online servers instead of your switch locally to work.

For the physical copies containing download codes… that’s a hard one. For any game two pack, search online to see if is one game on a cart + a download code. If that’s the case, it’s kind of redundant to buy it physically if the version downloaded is desired at all unless it’s cheaper that way.

Asian games with English often don’t do the same practice and include all of the game plus the DLC on the cart. However, for collecting, PEGI/CERO/foreign titles are often less desired over ESRB titles.

Do your research though. In 2022, the OLED Switch changes nothing about the below.

The cartridges that the Switch use load faster than the discs other consoles use, because the data is on a ROM chip that has about the same read speed as an SSD. To put it into perspective, the internal memory of the Switch comes in at around 300 MB/s, the SD drive averages 60 MB/s and the cartridge averages 100 MB/s. A PS4’s disc read speed is 27 MB/s, for comparison.

This is why games now install to the hard drive, starting with one of the Xbox 360 updates, because the disc read speeds can really inhibit load times. Now the games load data that it uses often on the hard drive and then will read other data from disc. On the Switch, it doesn’t install a lot of data from the cartridge, because the read speeds are so high.

The Pros and Cons of the eShop

For me, I prefer cartridges, for the nostalgia, but honestly both options are good – I prefer going cartridge heavy as well to save on storage and only buying games from the eShop that I can’t dream of not being able to take with me anywhere, even if I forget the carts.

I hope this helped explain the differences. 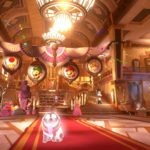