How to Drag and Accel in Mordhau – A Quick Combat Guide

Want to master some of Mordhau's toughest techniques? Check out our guide down below.
October 12, 2019

The competitive multiplayer hack n’ slash Mordhau has cultivated a hardcore fan base since its release. With each passing day, more and more players take to their keyboards so that they can storm the medieval battlefields of Triternion’s latest game. That being said, new players will likely be met with an incredibly steep difficulty curve when they begin the game.

Simply put, Mordhouse is tough. The complex combat techniques and tactics within the title each take hours upon hours to master. With that in mind, new players will likely find it difficult to traverse the Mordhouse battlefields without getting cut down by more experienced players. But, don’t worry. We’ve got your back. Here is a quick guide to mastering two of Mordhouse’s most useful and intricate combat techniques.

For a guide to general tips and tricks on playing Mordhau, check out Mordhau 15 Tips and Tricks for New Players – A Beginner’s Guide.

What Are Drag and Accel?

Two terms Mordhau players will often be met with are “drag” and “accel.” These are terms for two different combat techniques. If you can master these moves, then you will likely see a stark increase in your combat effectiveness on the battlefield. Within the video above, YouTube content creator Klean can be seen demonstrating drags and accels.

A drag, also known as deceleration, is when a player manipulates their attack so that the strike lands on their opponent later than their foe expected. The advantage of this technique is that you can punish your opponent for parrying or otherwise reacting to your attacks too soon. By slowing down your attacks unexpectedly, you can manipulate the pacing of your combat exchange. This is an excellent strategy that can really help give you a decisive edge in combat.

An accell, a shorthand for acceleration, is when a player manipulates their attack so that the strike lands on their opponent sooner than their foe initially expected. Combined with dragging, an accel can be a great way to really keep your opponent guessing. If your opponent cannot predict your timing, then they cannot effectively parry or chamber your attacks. Consequently, using these techniques effectively will largely disarm your opponent from performing otherwise devastating counter-attacks.

Drags and accels are advanced tactics, so it will likely take some time to master them. That being said, there are a few steps you can take to ensure a successful drag or accel. First, let’s talk about drags.

There are four basic forms of drags. In every scenario, you will be attempting to decelerate your strikes in order to throw your opponent off of your pacing. This is important because your opponent can set up devastating counter-attacks if they begin to get into the rhythm of your pacing.

Perfecting drags will take time and dedication, as this is such an advanced technique. Consequently, it is advised that you check out the videos provided for a visual representation of the process.

Just at the end of the windup for your right overhead attack, lurch your camera downwards and towards the right. This will move the strike zone for the attack and throw your enemy off your rhythm. To ensure your overhead drag connects, press S+A as your 90 degree turn comes to completion. If you are doing a left overhead attack, then simply repeat the steps above but turn to the left instead of the right and press S+D at the end of the attack.

At the end of the windup phase of your stab attack, shift your camera 90 degrees to the right or left. However, you will then need to quickly arc the weapon back towards your opponent in order to land the strike.

Performing an accel is much like performing a drag. However, the end result is quite the opposite. Rather than slowing down your attacks in order to throw your opponent off of your rhythm, you are now hastening your strikes so that you can quickly land a devastating blow.

Want to bring your combat to the next level? Check out our guide How to Chamber in Mordhau – A Guide to Success. 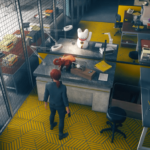 Control Guide: How to Solve the Roulette Wheel Puzzle and Unlock the Golden Suit